I wrote the words for the new Public Digital website. Public Digital (PD) works with governments and companies that want to become a lot more digital.

“Digital. Teams. Work.” is the crispest headline I could write that would tell the Public Digital story in a PD kind of way - straightforward, to the point. It also needed to be a “promise” - you need to understand what distinctive thing you’d get if you hired PD to help you with your transformation project. Here it is on the home page and here it’s used as a narrative device in Claire Bedoui’s yearnote for PD:

Rooted in our belief that decision-makers should fund teams, not projects, we also articulated our theory of change:

A lot of people in the digital and digital gov industries already know the people at PD or their history building GDS and GOV.UK, and they’ll just pick up the phone. But there are people who don’t know PD well. They’re often potential customers, and are the website’s key audience.

The website is a way to tell them the story, and clearly explain why PD is different to most consultancies. The difference is not a matter of brand but it’s something that actually matters - teams, delivery, remaking organisations for the internet era.

We wanted one headline that could explain the “promise” of PD as sharply and briefly as possible. Imagine a graph with two axes, descriptive-evocative and activity-outcome. A headline like “Public Digital delivers transformation with digital teams” is pretty does-what-it-says-on-the-tin and would sit in the descriptive/activity quarter, and “Public Digital helps you adapt to a changing future” is closer to the value/evocative quarter.

But there’s a problem with headlines like that. They’d be accurate but not distinctive - you could imagine a different consultancy saying the same thing. We got to “Digital. Teams. Work.” by pushing to make it more distinctive.

And because the headline is a bit evocative, the next couple of sentences unpack the promise in plainer language. 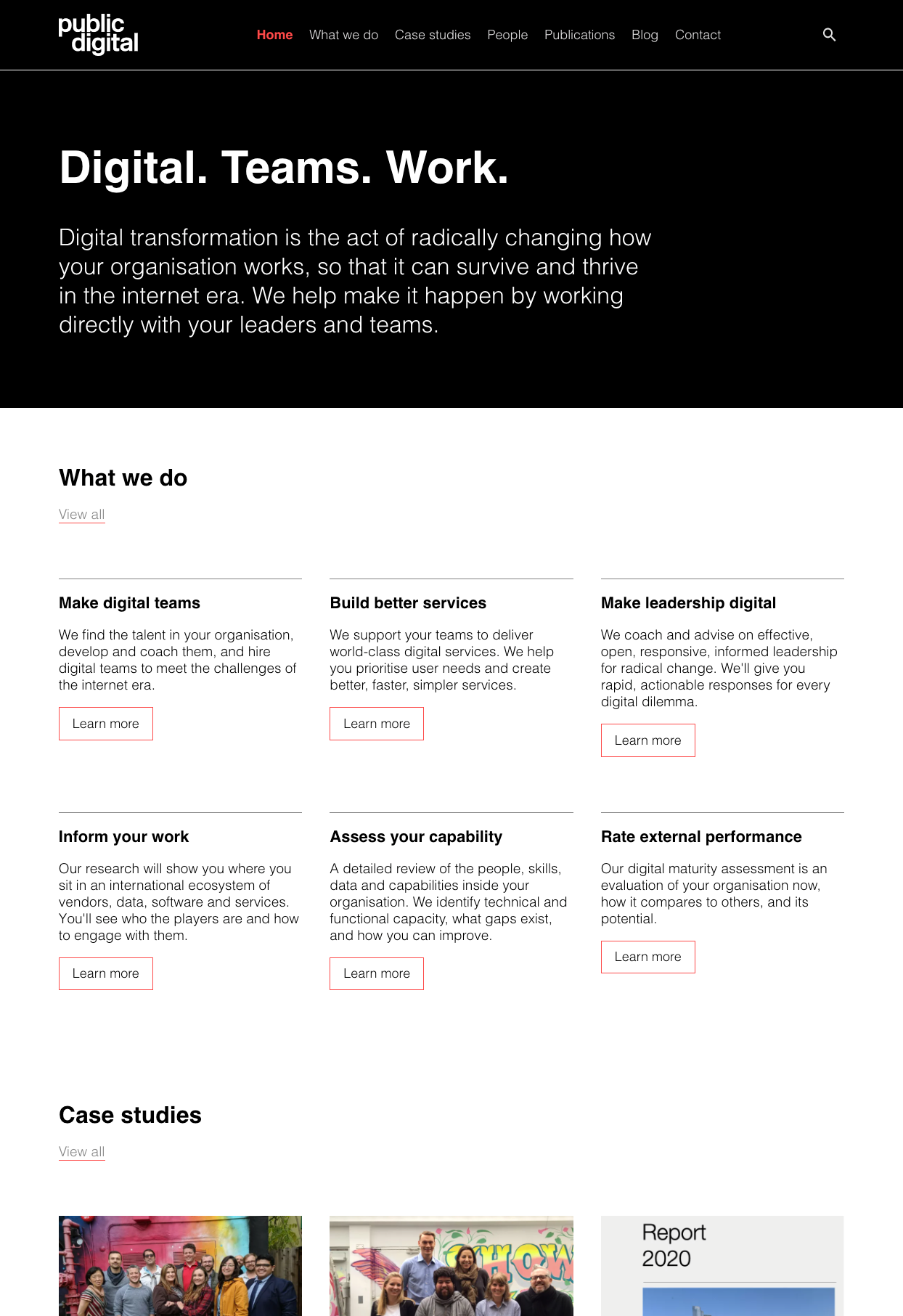 Elsewhere the work was often about making sure the words are clear and simple (you might say that clarity is part of PD’s distinctive offer). Some organisations might talk about their “Services”, or find some jargon that makes them sound expert. PD just says “What we do”, because their work speaks for itself.

The content designer/writer’s tools are listening, typing, testing and iterating. Do the words, and see if they’re right. Rewrite the sentences. Sometimes writing the words reveals that you need to refine your shared understanding of who you’re speaking to, or how you want to talk about what you do. The understanding develops, the story is adjusted, the words are rewritten. You hit publish. Even then you might rewrite again: you think of better ways to tell the story. Websites are living things.

Of course the words weren’t solely written by me: a team of designers, developers, subject matter experts and project wranglers inside and outside of PD also did the work, and thank you to Mike Bracken and them all. Good team, good project.

How to find your books 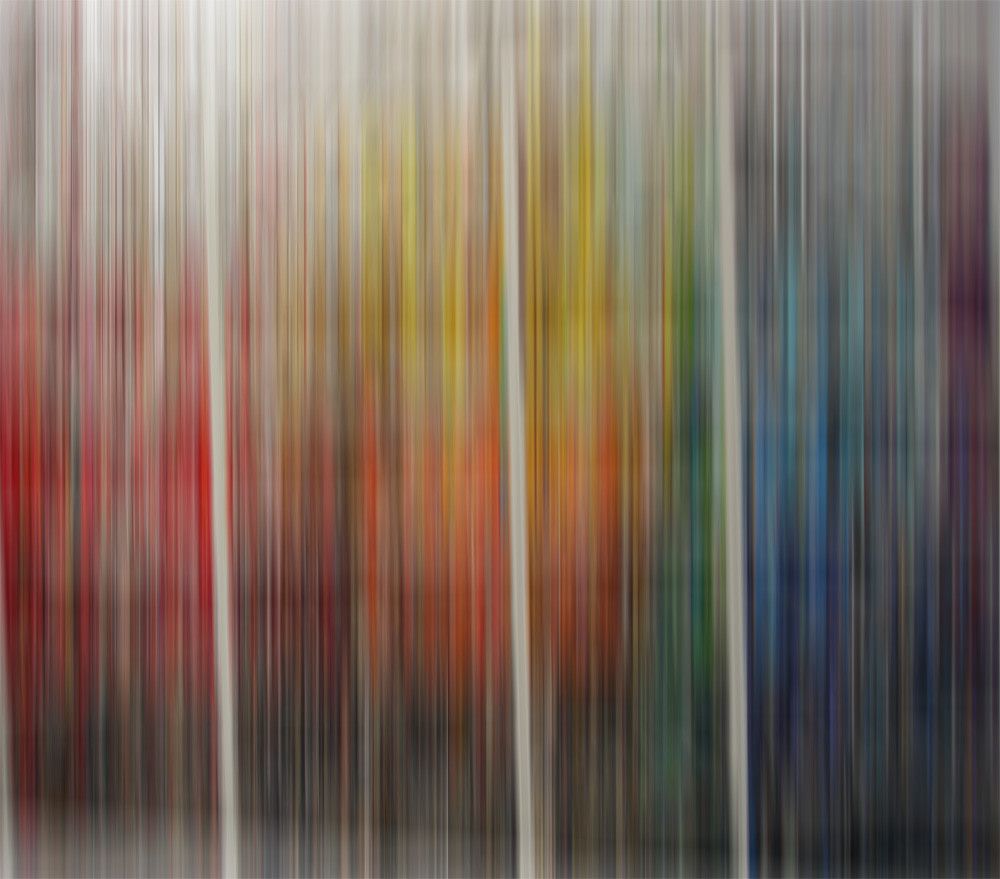 Matt Webb wrote about using an app called Memos to make his bookshelves searchable: find where that book is by searching your photos. Brilliant, though I guess it needs your bookshelves and the photos to stay fairly in sync.

My own book filing scheme used to be by colour, which worked very well when I had plenty of time to look at books, and remember what colour they were. But for a few years recently I’ve filed books by “random stow”, which I do not recommend because it’s not very useful.

Amazon should make a smart camerathing that looks at your shelves, tells you what is where, but also notes that you haven’t moved these books at all in 24 months and they’re worth X on the second hand market click here to make it happen.

2024: Amazon Prime Home team lead Karyn steps around a Freshco grocery delivery drone twitching on the path. It has been jammed by your home’s router for a breach of delivery licence, and will be released shortly. Your Amazon door authenticates Karyn, and she walks into your home. She sets the Dash scanner going in the living area. While it’s looking at your belongings, she disconnects your TV and pops back out to the truck to get a newer one. She reconnects your PrimeFire box to the new screen but puts the Google Chromecast TV dongle to one side, placing a helpful advice sticker on it. The Dash scanner meeps and identifies with a laser light a dozen items in the room that are on your Unwish list. She places these in a cardboard box, and once they’re sold in Amazon’s Seim Anew market your Prime account will be updated with a credit.

Data is a material for building with

I believe that architects and engineers must think of data as a material. Start with visibility: disclose data collection in a way that makes it clear and understandable. The built environment could show the “seams” of its data. Just as some buildings have information displays that indicate energy performance, a building might show how it collects and uses data.

I helped Sarah Gold at Projects by IF write a piece for Icon Magazine about data being a material for building with (the piece doesn’t seem to be online though :( ). The work of Ben Cerveny and Timo Arnall was really useful in thinking about how data relates to the built environment.

Why Co-op Digital writes a newsletter I wrote a bit about the Co-op Digital newsletter for the Co-op blog, how it started and how it’s put together etc. The clever Amy McNichol did the difficult “making it make sense” bit.

There are still “Amazon is coming!” stories, and there are frequent “this seems like a problem for big tech companies” stories. Occasionally we add small bits of fiction if we think they might be a good way to explore an idea.

However the jokes are still terrible. “Do you want frAIes with that?” needs not an explanation (machine learning at McDonald’s) but apologies forever, sorry.

You are right, the jokes are not good. But the fiction bits seem to resonate with readers. Current stats: 51% open rate, 15% click rate. Four years ago I started Holdfast Projects at a time of change. A health thing had happened. I left a company I’d given a decade to. We moved up to Scotland to see more of the wider family. I wanted to work in different industries to security (personal finance? digital but less secretive?) and a different kind of work (writing). I knew that I didn’t want to spend half the week down in London, or every day commuting to Edinburgh. So I did some consulting gigs doing product management and design for tech companies, but gradually I tried to nudge the work towards writing what I (semi) jokingly call “expensive words”.

This is both a quadrennial year note for a company and a triennial-ish year note for a new career, and the latter is probably more interesting. Some things I learned, in no particular order:

So there’s a bit of momentum now. I can see a couple of decision points on the horizon:

Of course none of it is possible without support from my family, who are the utter best. And thanks to customers, colleagues and co-conspirators - you are many, a delight to work with. You’re all appreciated, I am lucky. Anyway, year 5 let’s go.